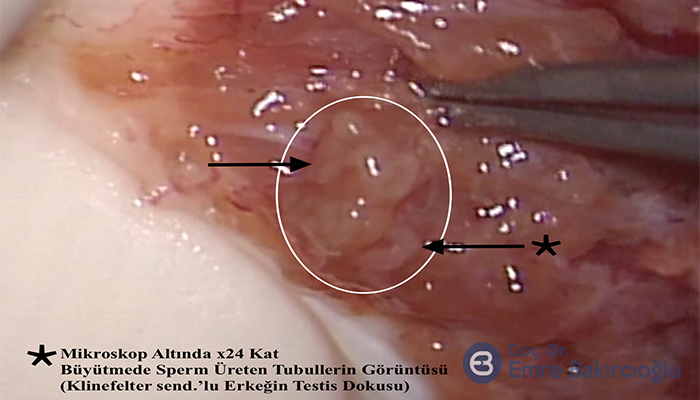 Micro-TESE surgery is defined as examining and sampling testicular tissue under microscopy to search for sperms. This operation is used in males who have not sperm cells in their ejaculate (azoospermia) due to a sperm production disorder (Non-obstructive azoospermia). Micro-TESE operation is not indicated in men who have normal sperm production but not sperm ejaculation due to an obstruction, since normal sperm production occurs everywhere in the testicles of these men, and using microscopy to search for sperms is irrelevant.  Spermatozoa can be easily recovered by removing a tissue sample from anywhere in the testis or by needle aspiration of fluid-tissue from the testicular tissue (TESA).

What type of anesthesia is used for the micro-TESE procedure?

What is the difference between TESE and micro-TESE?

Unlike the conventional TESE procedure, the testicle is completely opened by a single horizontal incision. Sperm-producing tubular structures in the inner and deep regions of the testicle are reached and examined under microscopy with 20 to 25x magnification. The microscope we use can achieve up to 40x magnification. In some patients, high magnification helps us with the very small differences in the diameters of tubules, making it easier to select the ones that produce sperms. The probability of success is much higher with micro-TESE, compared to conventional TESE which involves multi-biopsy from tissues with dilated or close-to-normal tubular structures. The micro-TESE operation makes it possible to harvest a higher number of sperms from less testicular tissue. In azoospermic (NOA) males, the loss of testicular tissue is up to 70-fold less with the microsurgical method, compared to multi-biopsy, which minimizes injury to testicles from the procedure and the effects of testosterone secretion.

Another benefit of micro-TESE, which is conducted under microscopy, is that the vascular structure of the capsule enveloping the testicular tissue can be more clearly observed with a microscope, allowing incision without damaging the vessels supporting the testicles. This important benefit minimizes potential postoperative complications. Studies comparing the testosterone levels of males that underwent micro-TESE vs multi-biopsy have shown that the testosterone levels were comparable to the preoperative levels with micro-TESE. However, the preoperative testosterone levels may be low in some azoospermic males with impaired sperm production. It is advisable to identify these males before micro-TESE, and elevate their testosterone to normal levels before the operation, and ensure regular postoperative follow-up of these patients.

What would be your advice to patients before and after micro-TESE?

The patient will not need to remain in the bed for recovery; however, because this is a delicate procedure, it is advisable to reduce normal daily activity for a couple of days. The dressing of the incision site needs to be replaced 48 hours after surgery. The patient is allowed to take a shower after three days. Because the stitches are self-absorbing, they need not be removed.

For which type of azoospermic patients is micro-TESE particularly important?

Males with the Klinefelter Syndrome, a genetic disorder that affects one in every 500 males in the world, suffer from infertility due to smaller-than-normal testicle size (2-3 mL), reduced testosterone levels, and absence of sperms in the seminal fluid (azoospermia).

After having sperms harvested by micro-TESE, how long must a patient wait repeat the procedure, and how likely is it for sperms to be harvested again in the second operation?

A patient must wait at around 6 months to repeat the micro-TESE procedure. The probability of harvesting sperms a second time by micro-TESE is approximately 80 to 90%, depending on the characteristics of the patient and his testicles.

Would you recommend a patient to undergo micro-TESE a second time, if no sperms could be harvested in the first procedure?

In males with azoospermia due to production impairment, drug treatment is not possible, except in the case of hormonal deficiency, i.e. hypogonadotropic hypogonadism. Today, micro-TESE is the most advanced technique for harvesting sperms from testicular tissue in azoospermic males with elevated FSH values. However, the experience of the operating surgeon, the technical capabilities, and the experience of the embryology laboratory are strong determinants of success.

How many times can a patient undergo micro-TESE?

Because very small samples are removed from the testicular tissue and utmost care is exercised so as not to damage the vascular structure when making the incision, damage to the testicles would be far less than with multi-biopsy TESE. And the extent of damage that the testicles would suffer from this special operation depends on the size of the patient’s testicles, preoperative total testosterone levels, and previous history of TESE procedures (the technique of the TESE procedure). Therefore, it would be best to examine the patient thoroughly and inform them based on patient-specific data.

Is it possible to harvest sperms by PESA / MESA in males with impaired sperm production?

No. These methods are indicated in males with obstructive azoospermia. Because azoospermia is not caused by an anatomic obstruction, it is not possible to harvest sperms from the epididymis, i.e. the ducts, or directly from the testis in these males.

What is the likelihood that the sperms that had been harvested by micro-TESE and frozen would be viable after thawing for microinjection therapy?

The studies indicate average viability of 50% for thawed sperms. Although nearly 90% of sperms harvested from testicular tissue are vital (alive), only 5% of them are motile. Therefore, sperm motility, which is a key marker of sperm viability after thawing, is significantly reduced. However, if a high number of sperms were harvested, usually there should be no problem finding a sufficient number of motile sperms for ICSI after thawing. The micro-TESE procedure enables a higher number of sperm than the other sperm retrieval technique so that frozen thaw testicular sperm quality is better. Therefore, in most clinics in Europe and around the world, azoospermic males first undergo sperm investigation in the testicular tissue and their sperms are frozen. Afterward, their spouses undergo ICSI. My approach, in this case, is to explain the benefits and drawbacks of the procedure to the patient and his spouse before deciding on preparing for IVF, before using the freeze and thaw method, and reach a joint decision after hearing their views.