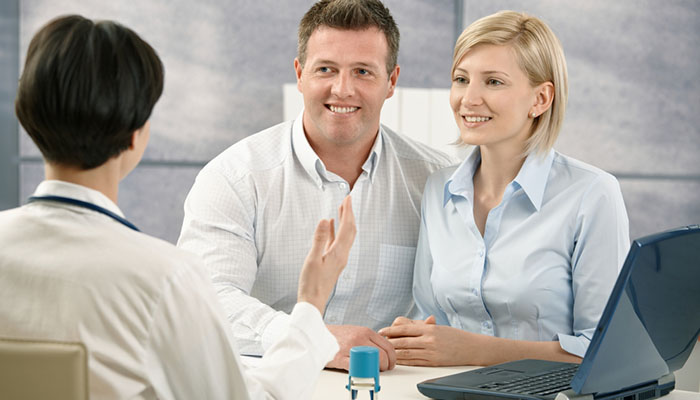 In medical terminology, azoospermia means the complete absence of any sperm cells in the seminal fluid. Although it affects around 1% of the male population, 10 to 15% of infertile males (those who have a problem having children) suffer from azoospermia.

Azoospermia may be caused by three reasons: the sperm production failure due to testicle-related reasons, ducts enabling ejaculation of sperms from the testicle, and diminished secretion of pituitary hormones. To investigate and diagnose these causes, the male patient must first be examined and evaluated by a urologist.

The most common causes of azoospermia are related to testicles' sperm production failure. These may include congenital reasons (underdeveloped testicles (anorchia), undescended testicles, chromosomal disorders or genetic disorders of the Y chromosome (genetical)), or postpartum causes (injury, surgical intervention), testicular tumors, testicular torsion (testicle being twisted around itself, blocking blood flow), testicular inflammation due to mumps, toxic substances (chemotherapy), radiation exposure (radiotherapy), exposure to extreme heat, use of anabolic steroids such as testosterone, or systemic conditions such as hepatic cirrhosis or renal insufficiency. However, other than these cases known to have been caused by reasons related to testicles, approximately 50% of males remain undiagnosed (Idiopathic azoospermia) today. The men in this group are designated as azoospermic males (sperm production disorder due to testicle-related reasons). Less frequently, we see cases of azoospermia of the type hypogonadotropic hypogonadism caused by pre-testicular, pituitary hormone deficiency. Azoospermia caused by hypogonadotropic hypogonadism is the only type of azoospermia that can be treated by medication (gonadotropin hormones). Guidelines of European and American Urology Societies (2019) do not recommend drug treatment in azoospermic males, other than those with hypogonadotropic hypogonadism, for lack of sufficient clinical trial data.

How is azoospermia detected?

Is sperm ejaculation possible in men diagnosed with azoospermia?

Men with azoospermia could ejaculate sperms, albeit in small numbers, at a rate of 15 to 25%. To diagnose this condition, which is called cryptozoospermia, virtual azoospermia, or severe OAT, semen analysis in intervals and centrifugal analysis would be necessary.

If the complete absence of sperms in the ejaculate (azoospermia) is caused by testicular production problems or a deficiency of hormones secreted by the pituitary gland (hypogonadotropic hypogonadism), the condition is designated as non-obstructive azoospermia (NOA). Patients with azoospermia should be evaluated by a urologist specialized in reproductive health to investigate the underlying causes of sperm production problems.  The most common causes of sperm production disorders include undescended testicle and surgical operations aimed at correcting it (Orchiopexy operation). Also, early childhood cancers and their treatment, and orchitis due to mumps in adulthood may lead to sperm production problems. The frequency of testicular tumors is higher in males with azoospermia caused by production problems compared to the normal population. Therefore, the examination of azoospermic males by a urologist is highly important for detecting 1- testicular tumors which can be life-threatening, 2- congenital anomalies such as the absence of seminal ducts, and 3- anatomic disorders such as varicocele.

Also, hormonal or genetic examinations should be detected when necessary after the urological examination. The data from these evaluations are useful for informing couples on the success chance of extracting sperm from the testicles and on the success rate of in vitro fertilization.

In general, the FSH hormone levels are elevated, and testosterone levels are normal or below normal in males with azoospermia caused by testicle-related reasons. Testicle size is usually smaller than normal, around 8 to 10 mL. However, in some cases (in males with pathological maturation arrest), the FSH values (below 8 mIU/mL) and the testicle size may be in the normal range (20 mL).

Which hormones are tested in the blood, and how the findings guide treatment?

After the physical examination of azoospermic males, the doctor will usually order tests to determine blood levels of FSH and total testosterone. But in certain cases (e.g. gynecomastia, or low total testosterone), prolactin and LH levels may be also tested. In NOA, blood FSH levels are usually elevated. Some males in whom FSH are not elevated and at normal levels may still have sperm production impairment. In these males, testicle size is usually normal and sperm-producing cells do not reach the development stage to become sperm (a condition called maturation arrest). The more sperm production is impaired, the higher the FSH values. In the past, it was believed that FSH levels 2 to 3-times normal levels could be indicative of the complete absence of sperms in that person. But with the advances in new surgical techniques, we know that finding sperms is possible however high the FSH might be. A 2009 study in 792 males with azoospermia due to sperm production impairment showed that FSH values did not affect the success rate of finding sperms in micro TESE. The rate of success in finding sperms by micro TESE was lower in males with an FSH value below 15 vs those with FSH values higher than 15. This study was conducted at New York Cornell University, and reprinted in January 2019, 75th-anniversary special issue of Fertility and Sterility, as the most-read article. In any case, it was shown in 2009 that finding sperms by micro TESE was possible in high-FSH males without requiring further treatment.

Is it possible to detect a few sperm in ejaculate of men with nonobstructive azoospermia?

Males with previously-diagnosed azoospermia may time to time ejaculate sperms, albeit in small numbers, at a rate of 15 to 20%. To determine this situation, which is called cryptozoospermia, virtual azoospermia, or severe OAT, regular semen analyses, and centrifugal analyses are needed.

What do lower-than-normal FSH and total testosterone levels suggest in males with azoospermia due to spermatogenetic failure?

Is an FSH value within the normal range indicative of normal sperm production?

No. Normal FSH levels do not indicate that normal sperm production occurs inside the testicles, and testicular sperm recovery is not guaranteed by TESE. Testicular biopsy is used to determine if sperm exist in some males with normal FSH values.

Peripheral karyotype analysis (chromosome analysis) and Y microdeletion test should be used in all males who are suspected of azoospermia due to production impairment. If the absence of vas deferens has been established by genital examination, both the patient and his spouse (female) should be evaluated for cystic fibrosis mutation.

What are the most common genetic anomalies in azoospermic males?

Are there any genetic tests that show testicular sperm production in azoospermic (NOA) males?

Today, no tests or imaging methods can show the absence or presence of sperm production in testicles, except in complete loss of some genes (those in AZFa and AZFb domains) in Y microdeletion. A definitive diagnosis is made by sperm investigation in testicular tissue by TESE operation (Micro-TESE). If some or all genes in the AZFc domain are lost, sperms can be found in the testicular tissue, with a success rate of 50 to 70%, in azoospermic males by micro TESE.  In our clinic, we conduct a meticulous examination of centrifuged precipitates to find sperms in the ejaculates of many males with AZFc deletion, helping them have a child using ejaculate sperms by ICSI.

In a recent study investigating AZFb domain losses, it was reported that the reason for the low number of sperms in ejaculates was scanning too few regions in the test. Therefore, we scan for genes in this domain using a broader panel, if deletion is present in the AZFb domain genes. If there is a partial loss and the patient is azoospermic, we recommend searching for sperms in the testicular tissue by micro TESE.

Male fertility is caused by one or more of three main reasons. The first problem is a low sperm count (or complete absence of sperm production – azoospermia) having a detrimental effect on impregnation. The second, sperms fail to fertilize the egg due to abnormal sperm production. And the third, problems occurring during the transfer of sperms produced in the testicles into the vagina. The main reason for this problem is the obstruction of the ducts through which sperms are transported. Obstructive azoospermia accounts for approximately 10 to 20% of infertility cases.

How is azoospermia determined in males?

Most azoospermic males find out about their condition with their partner having difficulty getting pregnant. Venereal infections, injuries, or lack of seminal fluid after orgasm may suggest an obstruction. Urinary tract or vesical surgery in childhood, or double hernia surgery may cause obstruction. Because sperms are not visible to the naked eye, men or women can't detect problems in sperms. However, reduced seminal fluid ejaculation is indicative of obstruction. The seminal fluid amount is reduced in cases of absence of seminal ducts, prostatic obstructions, hormonal deficiency, or bladder neck occlusion (backflow).

How does obstructive azoospermia occur?

Acquired disorders include subsequent diseases of the reproductive system and obstructions caused by surgery or infection. In particular, inflammation and injuries cause deformation of the seminal ducts, preventing the sperms from reaching the penis. Hernia or similar other surgeries affecting genitalia may also block channels. Prostate or bladder neck surgery may also cause the ejaculated semen to leak into the bladder, resulting in impaired ejaculation. Obstruction of seminal ducts or vasectomy surgery prevents the produced sperms from flowing out.

These are disorders that may cause male infertility due to the deformation of muscles and nerves that arrest sperm movement. They occur as a result of nerve damage and spinal injuries after accidents. The nervous system may be impaired by sedatives, anti-depressive agents, and anti-hypertensive medications. In males with diabetes mellitus, the bladder neck or vesicula seminalis may be affected over time, resulting in reduced seminal ejaculation or retrograde ejaculation.

How is seminal duct obstruction determined?

To diagnose seminal duct obstruction, azoospermic males, as determined by seminal analysis, must be examined and evaluated by a urologist specialized in reproductive health. The patient’s history of past medical conditions and any previous surgical operations should be thoroughly investigated. If the obstruction is caused by infection, the underlying reason may be previous venereal diseases (gonorrhea).

In some cases of urethral inflammation, the patient may experience discomfort, including a burning sensation or pain, during ejaculation. Obstruction may also cause a reduction in the amount of seminal fluid ejaculated. To check for obstruction of seminal ducts, seminal analysis and, a genital examination by an experienced urologist are very important. If necessary, a transrectal ultrasound examination should be performed.

Is it possible to successfully treat obstructive azoospermia?

Diagnosis is the most important step in a successful treatment process. It is highly important for guiding the treatment to accurately identify whether the absence of sperms is caused by an obstruction or undeveloped ducts. Obstructive azoospermia can be diagnosed by various methods, including physical examination, seminal analysis, genetic testing, transrectal ultrasound examination, or urinalysis.

If seminal ducts are congenitally nonexistent (vas deferens agenesis), it is important to establish it before embarking on in vitro fertilization. Because, these males are highly likely to be the carriers of cystic fibrosis, a congenital genetic disorder. Therefore, an examination by an experienced urologist and diagnosis of this condition beforehand, and performing the necessary genetic investigations will help prevent cystic fibrosis in the infant conceived by in vitro fertilization.

After determining the underlying cause of obstruction, the ducts should be cleared by microsurgery. If this method fails, sperms should be collected surgically for use in IVF or other fertility therapies.